Use your account to work in the administrative section.
If you have no account, then produce registration.

Modern software technology can be better seen through the interface software.

Electronic Document Management System is a software product that can't have "ordinary" interface, and at the same time is being easy-to-operate for most users. It happens cause many users just cant or dont have enough experience to with a multifunctional system, implementation projects of electronic document management systems fail in spite of the popularity of the supplier and the cost of the project.

By preferring a software with the "ordinary" interface, by fully trusting a brand, built  only on the basis of marketing efforts, the customer risks to fail his goals, to waste time, to lose money and spoil his reputation.

Users and potential buyers of the document management systems opinion pool lets draw a conclusion that more attention is paid to the interface, which makes no problem to work with for novice PC users.


The logic is simple: the higher the ergonomics of the user interface, the more convenient  user functionality, the easier work inside the system for the novice PC user, the more rapid users get used to the system structure and to the work technique.


The less time users need to acquire skills of working in new system, the faster users accept the system and start bringing benefit to the company.

All the functions, required to support life cycle of the documents and tasks, can be found in the modern document management systems on default.  But interfaces of systems differ considerably. In chase of useful tools, developrs fail to create competent interface.


(Interface + functionality) - this is the case when the meaning of the reshuffled  summands changes dramatically. If there is a literate user interface functionality can always expand. On the other hand, if all possible functions are implemented using a "ordinary" interface, the use of multifunctional program becomes extremely difficult and sometimes simply impossible in an environment of most PC users. "Ordinary" interface has not change ever. That is why, at first to be literate system interface, and then develop the function, and not vice versa.

The products with "ordinary" ergonomics for display on the screen to open up to 15-20 times of nested windows, and then in the same way to close multiple windows, while being careful not to get confused in the windows and not lose your mind. Who needs it? Community systems of today began to pay attention to the key interface.

Users are increasingly interested not indicators of your greatness, and the number of interface manipulation in the system for normal operation.

Competent user interface is the guarantor of successful implementation and operation of any software product. Who today does not understand the risks faced with long and arduous at times setting, learning and natural resistance in the operation of a multifunctional software product with an "ordinary" ergonomics.

Only with the release of our software product, which was applied technology "visual segments", the relevant information is displayed to the user like a single rotation of the cube-cube, with one click. With its modern interface, only in the bb workspace user can see all the information he "as the palm, working with a comprehensive database. 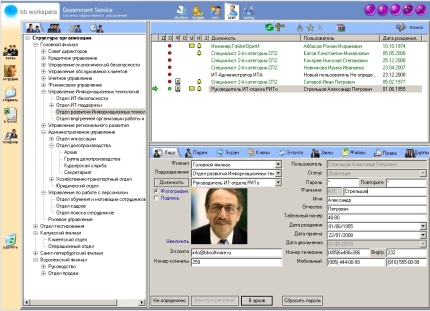 Only bb workspace interface makes it possible to use an integrated electronic document management system in the medium beginning PC users. Often a novice PC users are senior executives, as work on the PC previously performed their secretaries and managers were simply no need to use a PC. Technology works go ahead and now all heads is simply necessary to use a PC. And on what software will be used depends on whether the head to operate normally or not.

Only an effective management system bb workspace are done by the mind. The development of all system functions from the outset was the most time-consuming way: from the high demands of users to literacy interface-oriented inexperienced PC users.